What is the Digging Site?

The Digging Site is an area in the desert of Tanos. It was discovered by Miles. Miles was bored of his Magic Box and had a rough day, back in 2010, so he kicked the box hard. The bottom came loose and a treasure map was hidden inside the hidden compartment that was revealed. Miles packed his stuff and went off to find the treasure. Therefore in 2010 Miles Magic Box wasn't active, since Miles was gone.
On August 23rd 2010, Miles finally found out how to dig into the hard soil.

How the Digging Site works

What Miles found out, is that there are ants deep underground. If you bring him 2 food items, he will crumble it, the ants will loosen the soil and a dinosaur bone can be found. 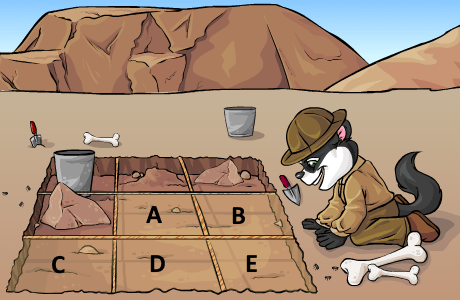 After you complete one skeleton, you can no longer dig, unless you bring the skeleton to the Ancient Museum.
If you are not in progress of building your Mining Bot to go to Farnox, you will receive a DNA Sample. (Which dino gives which sample will be announced as soon as I find out again.)
If you are in progress of building your Mining Bot, you will receive a Mining Bot Processor.
Click here to return to the Quest Page.